skip to main | skip to sidebar

Barn owls, one of my favorite subjects, have appeared in two of my most recent painting.  The painting with the two fledgling barn owls is called "Spread Your Wings" as demonstrated by one of the owls.  The other painting "Outside of the Box" shows a fledgling barn owl venturing out of the nursery box. Owl eggs are laid one day apart, and they hatch one day apart. I imagined this owl as the first hatched and therefore the first to venture outside of the box.
"Spread Your Wings" is on display this month at Gallery North in Edmonds. (508 Main Street) 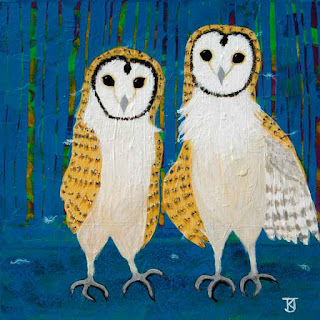 "Outside of the Box" will be part of the ARTSplash show at ArtWorks in Edmonds, 2nd and Dayton (One block southeast of the ferry toll booth). 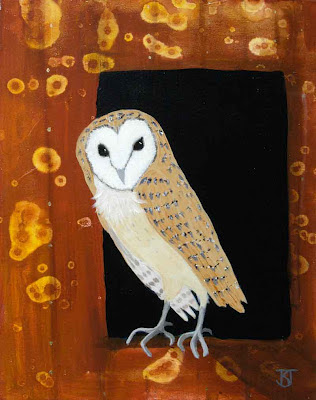 Hope to see you at one or both of the venues!
Posted by Kathleen A. Johnson at Friday, July 06, 2012

Kathleen A. Johnson
Edmonds, WA, United States
I am an artist and owner of Two Crows Studio. The studio was named after two adorable fledglings I once encountered. There is an old rhyme with the words "two crows for joy" so I thought it an appropriate name for my studio. Creating my paintings is a joyful experience for me and it is my intention to inspire joy in the world with my work.